This is the home of the The York Physics Of Pyrenoids Project (YP3). 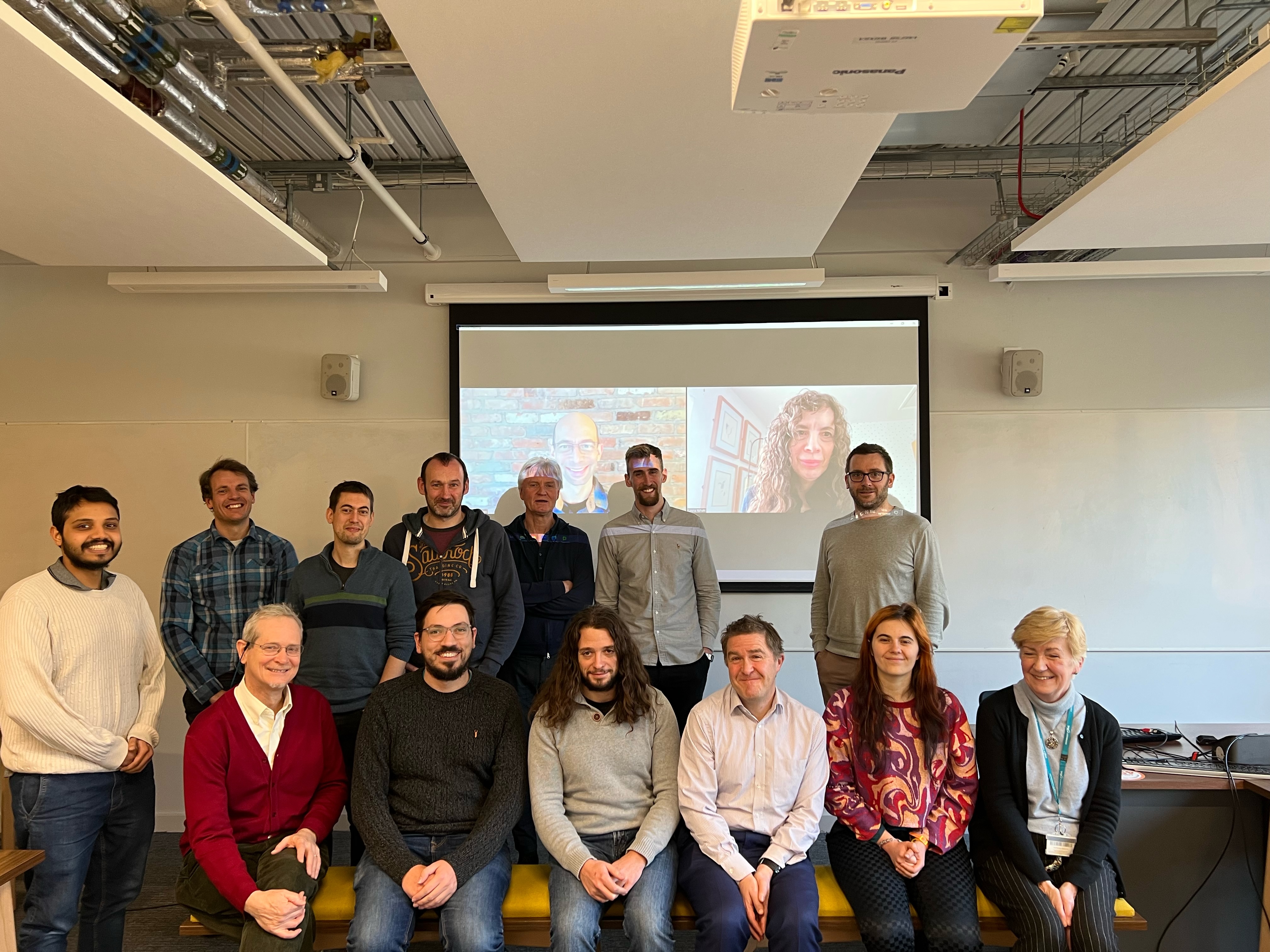 This is the shared Wiki for this project, which began in April 2022 and will end in March 2025. It will be the team space for sharing of ideas and information, including the External Advisory Board. Pages will be added over the next few months.  Suggestions are always welcome!

The York Pyrenoid Physics Project (YP3) brings physicists and biologists together in an intensively collaborative team, to identify the key components and mechanisms of self-assembly, function and dis-assembly of the pyrenoid. The team combines expertise in algal molecular/cell biology, novel biophysical experimentation and imaging, and theoretical/computational biological physics. YP3 impacts the physics of biological assembly, algal and food-chain biotechnology as well as carbon capture. It will also represent a step-change in complexity in biological liquid-liquid phase separation (LLPS).
The team will survey the structure and genetics of a large family of algal pyrenoids, then focus on intensive studies of core examples using cutting-edge imaging techniques able to track individual protein molecules as they move around the cell in response to external signals. Simplified mixtures of pyrenoid components, such as the active protein Rubsico and its 'linker' proteins, will be extracted from algae and the co-operative behaviour studied through the same techniques in vitro. The experiments will inform and test a growing computational model of the self-assembling pyrenoid, which will in turn make predictions for further experiments. A final output of the project will be the knowledge-base, from the combined model and experimental data, necessary to guide an attempt to build an artificial test tube pyrenoid, a next step in biotechnology applications for carbon capture and synthetic pyrenoids in crops to improve yields.
The early-career researchers in YP3 have unparalleled training in interdisciplinary research methods, communication and project management, and participate in wider Physics of Life activities in the UK and US through the UK Physics of Life and the linked US Physics of Living Systems Networks. YP3 is also supported by a world-leading international advisory board, who will additionally host the researchers for training periods.

Plant scientists will benefit from YP3 in several ways. The current mysteries surrounding Pyrenoid self-assembly, structure and function will be less obscure, and there will be a clear understanding of whether and how these respond in their variety to the environment and niche of each species. In particular, the user community linked to YP3 will have access not only to the published findings of the project, but to an online modelling tool that enables them to model new experiments.

Researchers in biotechnology will also benefit from the findings, in a long tradition of evolution's ability to find solutions to problems of detection, motion, perception, balance, camouflage, and more, that can be exploited technologically. YP3 will open the physics of self-assembly of finite domains to a new level of complexity, encompassing the internal lipid thylakoids and external starch plates as examples.

The broad biological liquid-liquid phase separation field will benefit at multiple levels. LLPS is widely reported in many cellular processes, however many of the in vitro and in vivo experimental approaches have limitations and can fail to distinguish between phase separation and other higher-order assembly mechanisms. The broad range of quantitative and biophysical approaches applied both in vitro and in vivo in YP3 will help provide a best practice experimental framework for characterising currently proposed and yet to be found biological condensates.

Experimental soft matter and biological physics will benefit from the technique development that is implied by the project's development of advanced super-resolution imaging and molecular tweezers.

The theoretical physics community from which the modelling techniques of YP3 come will also benefit in return. There is a growing strand of work within physics that identifies new physical processes that have been exploited by living systems. In particular, the role of active processes in tandem with passive forces, in the definition of self-assembled structures, is in its infancy, and requiring microstructural understanding, and a link to the coarse-grained phenomenology that is just beginning to appear. YP3 will contribute right at the centre of this knowledge gap.

At an emergent level of how to optimise interdisciplinary research, the wider academic community will benefit from the methodological exploration in intensive co-working that the YP3 team proposes. The daily challenge of how one creates a totality in an interdisciplinary research team that is greater than the sum of its parts has been the concern of the Co-PIs and Co-Is for years, but we are still all learning, and in our experience it is the early career researchers who bring the best, fresh new ideas to research problems at interfaces. Embedding best -practice mutual cross-disciplinary training into the team will benefit the quality of their future collaborations. Supporting the Physics of Life summer school and sharing best practice with the US-based 'Physics of Living Systems' network will disseminate these important skills widely.

LLPS is a surprising phenomenon in soft matter physics and materials science, in which  a mixture of different fluids can be made spontaneously to demix. In biology, there is growing and  compelling evidence that LLPS underpins normal  cellular physiology (e.g. immune responses,  replication, photosynthesis), and disease (e.g. cancer,  neurodegeneration). However, the underlying  physical principles of biological LLPS, and how they impact biological processes across different length and time-scales remain largely unsolved, principally due to its considerably greater complexity than in simpler physics or engineering contexts. Pyrenoids are the ideal target for a Physics of Life approach to study the complexity of biomolecular LLPS: many components, complex morphologies, driven (non equilibrium) processes, small geometries (of cells). 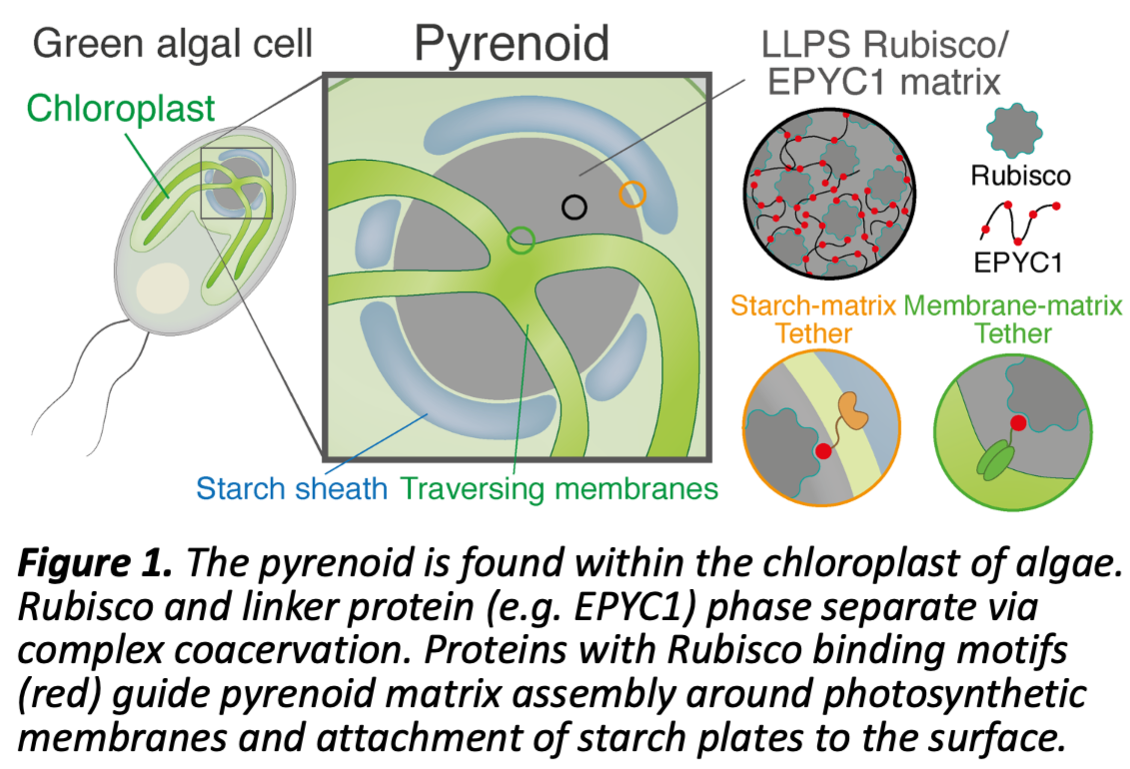 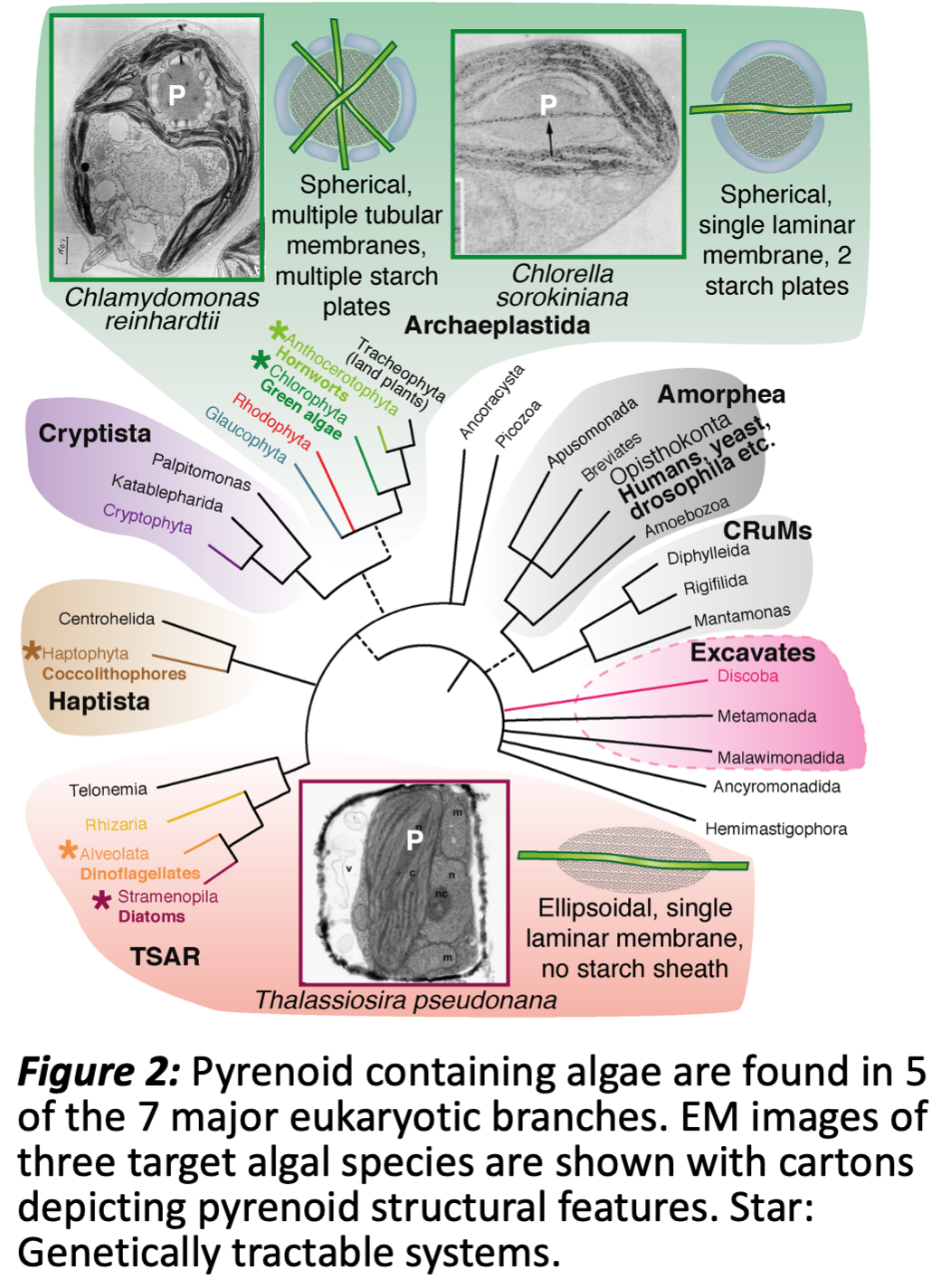 The goal of YP3 is to establish how LLPS into 'active' pyrenoid condensates drives one of  the most important chemical reactions on Earth - CO2 fixation (Fig 1). Pyrenoids are found in a  broad class of photosynthetic algae and some simple plants (Fig 2). The basic components of  characterised pyrenoids are the CO2-fixing enzyme Rubisco and an intrinsically-disordered  polymeric multivalent scaffold protein (e.g. EPYC1 in Chlamydomonas reinhardtii), which acts as a  linker, driving phase separation of Rubisco. The droplet-like properties of pyrenoid structures  are established [5,6] and are hypothesised to enhance Rubisco

CO2 fixation by increasing the local concentration of both enzyme and substrate. However, in addition to proteins, pyrenoids are cross-threaded by a network of lipid-membranes with well-defined shapes (such as tubes or lamellae), and in some cases the pyrenoid surface is covered by surface plates of starch. Consequently, pyrenoids possess structural and dynamic complexities that existing experimental and modelling tools cannot easily address, :

(iv) triggered kinetics of division. YP3 will address the biological physics of formation, equilibrium, and dissolution of complex biomolecular LLPS morphologies in pyrenoids. This YP3 approach to LLPS is currently unique.

To date, all knowledge of pyrenoid assembly and function comes from the model green alga Chlamydomonas, however pyrenoids have convergently arisen multiple times across the eukaryotic tree of life and have diverse structures (Fig 2). The variation in pyrenoid structures across algae will further enrich the biological focus of the project.  YP3 will have a funnelled approach to identify the most instructive examples, with the bioinformatic  and genetic mapping of a wide class of pyrenoids, then focussed biophysical and theory/modelling  on a few select systems. The integrated approach of YP3 has created and is guided by our  overarching hypothesis H0: Algal pyrenoids have convergently evolved from diverse  components but are all underpinned by the same family of self-assembly physics. The process of evaluating H0 will supply the know-how necessary for construction of an artificial pyrenoid from  diverse natural and synthetic parts, together with a multiscale model of its assembly.