How should we be thinking about deep prehistory? What formats are suitable for what sorts of discussion? Are some formats better suited to engage with ideas or theoretical perspectives while others are more appropriate to presenting data, broad-brushed syntheses, detailed analyses and so on? How should we maintain links across period specialisms and interest in broader themes?

These questions have come to the forefront of my mind after two days attending the British Museum's regular Palaeolithic-Mesolithic conference (17-18 Nov 2011 - weirdly has no website!) and a morning spent at Grayson Perry's special exhibition at the British Museum - 'The Tomb of the Unknown Craftsman The overall impression I got at the Palaeolithic-Mesolithic conference (known as Pal-Meso) was one of an in-crowd. With no website or publicity (beyond a limited mailing list and word-of-mouth) the conference remains the preserve of those in-the-know. Despite this it has seen incredible growth - now regularly two days long and, in this instance, attended by nearly 200 people.

The programme was dominated by the Palaeolithic. Understandably this much longer period is better represented at the conference. The entire conference was dominated by the results of primary analysis using a diverse range of methodologies (lithic analysis, environmental/ecofactual analysis, remote sensing). A few papers looked at more synthetic topics such as entire periods/lithic technocomplexes and a very few looked at less frequently found evidence types such as art.
Talks were short (15 minutes) and timekeeping was rigourously maintained. The short periods for questions before each break were used primarily for technical questions and the odd suggestion.

I wasn't alone in this feeling: though break-times were always buzzing with fruitful discussions, several colleagues felt similarly about many of the papers: Where are the people?
I realised that it was not that I felt that this use of data was inappropriate for archaeology but that it wasn't making the best of the conference as a forum for sharing ideas. For me, data is best presented where it can be scrutinised, unpacked and tested by the reader in their own time. A conference is an opportunity to present more challenging ideas and engage with theory, to bring perspectives together and make connections across peoples' work.
The conference felt atomised: though papers were grouped thematically there were rarely particularly strong synergies between them apart from geographic or chronological links.

There were exceptions to these trends: including personal highlights such as Jill Cook, Jessica Cooney and John Pipriani on upper Palaeolithic art, two presentations delivered by Matt Pope on La Cotte and Beedings, Alan Saville's look at new upper Palaeolithic evidence from Scotland and Radu Iovita's paper on a new Lower/middle Palaeolithic site in Romania. Most (but by no means all) of the Mesolithic papers were reasonably engaging (though I had the benefit of better background understanding for these).

I also noted that I was the only person to feel so strongly that an opportunity for discussion had been missed with many colleagues feeling that the information had been a useful way to keep up with neighbouring disciplines without having to do a lot of reading.

The Tomb of the Unknown Craftsman

The contrast between the two day's of the conference and my experience at Grayson Perry's exhibition was dramatic. I went with one other archaeologist, a journalist, secondary school art teacher and an arts administrator. The exhibition is a mixture of objects from the British Museum's stores, works produced for the purpose by Perry and his older works. Acting both as artist and curator Perry has been able to build connections between objects across cultures from a vast range of periods and places. Grouping artefacts according to diverse themes such as violence, sex, forgeries, mapping and magic Perry has managed to bring new light to these objects and his overall themes. These broader themes were woven through the exhibit and considered pilgrimage, the biographies of objects, their contexts and our relations to them. 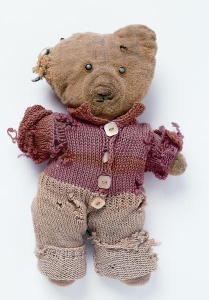 I felt that the playfulness and transparency with which this was done avoided the self-obsessed seriousness or obfuscation that is common in much contemporary art. This is not to say that Perry did not use his personal life - his childhood teddy Alan Measles is a motif throughout his work - or lay everything out completely explicitly, but a balance was struck between exposition and allowing the audience to build their own connections and impressions. More importantly the humour in the connections - an Asante crown paired with Perry's own 'Ancient motorcycle helmet' in the style of a Celtic crested helmet - brought welcome relief from the earnestness of most museums. It is rare to hear laughter as a reaction to material in the British Museum! 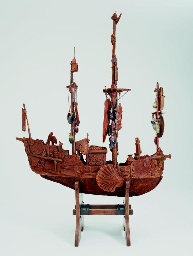 Tomb of the Unknown Craftsman

The final piece in the exhibit was the 'Tomb of the Unknown Craftsman' itself: a ship covered in casts of hundreds of objects from the museums collections and, on a central plinth on the deck, a real flint handaxe. This "tool that begat all tools" was given no archaeological context beyond its age: 250,000 years.
The contrast between this and the treatment given to almost identical objects in the conference was incredibly potent. All of a sudden an object that was not even produced by a member of our own species was being appreciated for its artistic integrity, for being the results of a person's efforts rather than as a dot on a map or graph showing cognitive development or raw-material transport.

I am not for a moment saying that data-rich approaches to any archaeological period are wrong or even inappropriate. Both approaches - dry detail and playful poetics - feed off one another but I feel that each is more suited to given platforms for presentation - the media should suit the message. If people are in a space together talking about archaeology is that not a more appropriate environment to be engaging in our ideas of the past and the people that made it?

I don't feel I have made my argument very well...... Maybe I need to talk to you about it?